After one of the wettest winters on record, it could be assumed that UK arable soils will be in desperate need of first aid before the next cropping season begins....

However, reports suggest otherwise, and growers should carry out a careful post-mortem before investing in expensive remedial work that may prove to be unnecessary.

Once it started raining in late September last year, it didn’t stop until March, leading to concerns that soils incurred significant structural, biological and chemical damage.

But the rain arrived so quickly and in such large quantities that, in many cases, fieldwork was brought to an abrupt halt and growers simply couldn’t push on with autumn cultivations or drilling.

Even where drills were able to grab any further opportunities in marginal conditions, because subsoils were still relatively dry after little summer rainfall, any deep structural damage has generally been avoided.

The only exception to this rule is where root and field vegetable crops were harvested in extremely wet conditions to avoid heavy crop losses. 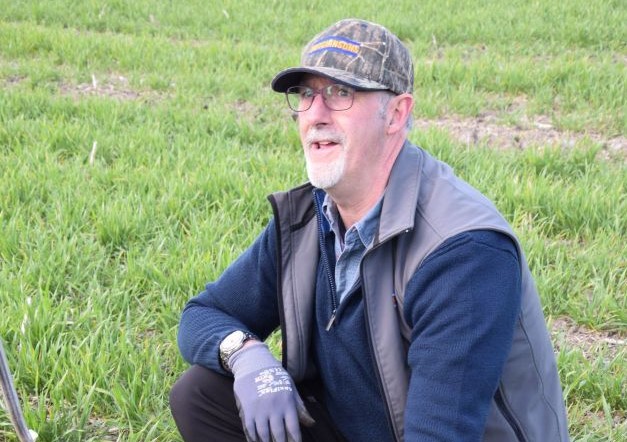 Dick Neale, technical manager at agronomy group Hutchinsons, has seen evidence to suggest damage is limited in assessments he has carried out as part of the company’s Healthy Soils programme across the country.

He says most of the structural issues in combinable crop rotations are confined to the top 10-15cm, mostly on “mobile” soils with high silt or sand content. After roots, any damage he has seen largely extends no deeper than 30cm.

This should allow many growers to rectify any surface compaction with a plough or multipurpose cultivator, without the need for slow and expensive deep subsoiling.

“Growers should make no assumptions, though. Get out with a spade and identify where the problems are. Then think about the tools you have and how they can be used to rectify the problem.

“You don’t have to dig a 1.5m pit either – 60cm should be enough to give you an idea of what’s going on. Look at where the current crop’s roots are and, if they are right down the profile, compaction isn’t a problem,” explains Mr Neale.

A cause of some of the surface compaction after the heavy winter rain is overworked seed-beds, and Mr Neale says this is something that should be considered ahead of the autumn.

In many cases, the top few centimetres of heavily tilled soil collapsed under the weight of the bursts of rain and this cut off infiltration into the subsoil or under drainage systems.

The agonising result was seen in numerous videos posted on social media, which showed water running off fields and down the road, taking significant quantities of soil with it.

This leads to the conclusion that less is more in terms of autumn cultivations where good soil structure has been maintained, helping to maintain infiltration rates and resilience to future heavy rain.

Mr Neale notes that soil biology has “been through the mill” and is likely to be “at a low ebb”, with neither cold and wet soils in the winter and the more recent drought providing favourable conditions.

In addition, soil fauna doesn’t like being hit with significant quantities of bagged nitrogen, and many farms applied plenty earlier in the spring to give struggling crops a boost.

Application of organic materials where available will help feed biology and reducing tillage minimises the risk of further damage ahead of the autumn.

There are also areas that growers decided to leave fallow – either by choice or due to crop failure – and soils may also be lifeless, having not supported any growing plants for several months.

In these situations, summer cover crops may be a useful tool to breathe some life back into soils and improve structure ahead of autumn drilling.

Mr Neale suggests that any summer cover crops should be sown when moisture arrives from late June onwards and mixes should include species such as linseed, white mustard, buckwheat, phacelia, crimson clover, radish and vetch.

“You can also add in some C4 plants such as millet or sorghum, as these grow quickly and can withstand drought. If you haven’t drilled by 10 September, don’t bother.”

The 950ha operation received 80mm of rain in the last week of September alone, followed by a further 91mm through October.

Mr Brock says his team tried to force in as much winter wheat as possible, but at the end of October, they pulled out and put the drill back in the shed until spring.

“Soils on the farm are very prone to compaction when wet and the consequences can take many years to correct.

“It was the right decision, because where we did push on, crops are not pretty. The headlands are poor and where it was so wet and now so dry, limited rooting means they are really struggling,” he explains.

This is in contrast to the spring crops that replaced the planned winter wheat acreage. These included spring milling wheat, canary seed and combining marrowfat peas.

Some better-drained heavy land was drilled in early February, but the majority went in from mid-March onwards and look promising after ground was cultivated and drilled in good, drying conditions.

“I have been nervous about too much spring drilling in the past, but we are finding out that we can do it surprisingly well.

“We would like to grow more – about 50/50 winter and spring – to reduce our risk in the autumn. It’s just a shame that spring crops don’t make more money, as it has wiped about £60,000 off our whole farm gross margin this year,” he adds.

Mr Brock will be guided by his spade when deciding on what action to take after harvest, but suspects it will largely be lifting out surface compaction where the drilling rig was turning on headlands.

This will be done using a Vaderstad Topdown multipurpose cultivator. Where any compaction is deeper than 15cm, a Flatlift subsoiler can be used to achieve shatter at the appropriate depth.

Recently, the farm has also invested in Vaderstad Carrier disc harrow which can be set to work shallower than the more aggressive Topdown, resulting in less loosening and blackgrass seed kept closer to the surface.

“We will be using the Carrier much more this autumn where our soil structure is in good condition,” adds Mr Brock.

The critical importance of functioning drainage has been underlined this year on David Lord’s Essex farm, and investment in renewal will continue once an imminent cashflow crisis eases in 2021.

Farming 700ha along the county’s northeast coast near Clacton-on-Sea, the farm has a wide range of soil types, from marine and London clay to sand over gravel.

Using a direct-drill establishment system for combinable crops, Mr Lord can react quickly when drilling windows arrive and managed to get 60% of his autumn drilling plan executed, with priority given to the heaviest land.

After receiving three times the average annual winter rainfall, any drainage issues on these heavy, underdrained soils were laid bare and the crops suffered as a result.

“The winter wheat in waterlogged areas has also struggled, as roots didn’t get down in the wet and now it’s turned very dry.”

Mr Lord says this has really focused the mind on continuing improvements to the land’s drainage systems, with a policy of rotational improvements set to continue.

This includes complete renewal of old, failing systems, but with completely new drainage installations costing up to £2,500/ha, major works may have to wait until cashflow improves.

“Ironically, following a season where our drainage problems have been exacerbated, we are going to have to put investment on hold for now,” he adds.

Short-term measures until improvements can continue will include maintenance of ditches and drainage outfalls, plus mole ploughing, which proved its worth where carried out ahead of last autumn’s drilling.

In the areas where crops have failed and land sat fallow, summer cover crops will also be used to help restructure and improve soil biology ahead of the autumn.

Soils have also returned the lowest soil nutrient levels in testing this spring after the wet and mild winter, so nitrogen-fixing species in the mix will aim to reintroduce some fertility ahead of the following crop.

With the farm five years into a transition to direct drilling, cultivations aren’t a consideration this autumn and Mr Lord thinks adopting no-till has definitely helped to weather the storm of an extreme season.

“Infiltration rates have improved and allowed water to move through the soil during the wet winter. Soils have also retained moisture through the dry spring. It has been reassuring.”