The next few weeks are the ideal time to establish a summer cover crop mix on uncropped land requiring improvements to soil structure and health after last winter. ...

Short-duration summer cover crops, such as the new seed mixes available from Hutchinsons (see below), typically feature sun-loving species, such as phacelia and C4 plant Japanese reed millet, that will grow rapidly given warmer spring conditions and adequate moisture.

“Summer cover shouldn’t be sown too early as it increases the risk of some species going to seed, so early to mid- May is the ideal timing,” Lincolnshire-based agronomist Alice Cannon says.

Phacelia and white mustard are two species to watch closely to ensure they don’t go to seed, but millet can also become quite woody if left in the ground too long, which means it will take longer to break down. This can all be managed through careful choice of drilling date and termination timing, she notes.

Hutchinsons bioagriecologist Ed Brown says summer cover crop mixes should typically deliver their main soil health benefits within 8-12 weeks, after which time they can be terminated to allow a timely entry for the following crop.

He advises growers to establish summer cover properly, as they would with any spring crop. If drainage work needs to be carried out during this period, the cover should be allowed to establish first so that it carries vehicles and equipment better, avoiding further soil damage.

If, following a close inspection, it is deemed that remedial subsoiling is needed, this can be carried out either before drilling the cover or later on after it is destroyed. Timing of this should be when soil conditions allow for shattering, not smearing, he advises.

Mr Brown notes that many of the waterlogging issues seen last winter were due to relatively shallow surface compaction, so growers must carefully assess soils when they are moist enough to check there is a genuine need for later remedial work.

Indeed, some surface issues may be alleviated by the “conditioning effect” of growing a summer cover crop anyway.

Following the recent spell of dry weather Miss Cannon cautions growers not to confuse dry soils with compacted ones, so any assessments must be done when there is sufficient soil moisture.

Indeed, given the lack of rain during April, Miss Cannon questions how effective spring cropping will be and suggests growers with land still to drill may be better focussing on next season by waiting for moisture to establish summer covers instead, to help create the seedbeds that first wheats need to maximise potential next harvest.

Moisture conservation for autumn drilling is a potential benefit from summer cover, as cover crop roots draw moisture from deeper in the soil profile, as well as boosting organic matter close to the surface, which improves moisture levels for following crop germination in the autumn, she explains.

Mixes based on a diverse range of species can be more effective than those featuring just one or two and helps mitigate potential “green bridge” issues for pests and disease, Mr Brown says.

Species with dense, vigorous roots, such as linseed and millet, provide excellent soil conditioning, while others, particularly legumes, are good at improving nutrition. For example, burseem clover is an effective nitrogen-fixer, while buckwheat is able to scavenge phosphorus well, he notes.

Growers planning to graze summer cover with livestock should be aware that buckwheat has been associated with causing photosensitivity in some breeds of sheep and cattle, however Mr Brown believes the risk is negligible providing the species makes up only a small proportion of the total mix.

Miss Cannon concludes by urging growers to tailor summer cover crops carefully to individual field requirements and use them as part of a strategic approach to managing and improving soil health across the whole farm over multiple years. This approach includes crop choice, cultivations and the strategic use of stewardship on unprofitable land that is regularly difficult to crop.

“Cover crops are not going to sort out soils on their own, but they can play a very important role.”

Mixes are based mainly on species of legumes, brassicas and forbes [non-woody herbaceous, broadleaf plants] with known management and proven effectiveness in UK conditions.

There are six-way and three-way mixes available for catch crop options, while the overwinter mixes each feature eight different species.

Contact your local Hutchinsons agronomist or call 01945 461177 to discover which cover crop mix is right for your farm. 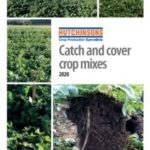 Our own range of catch and cover crop mixes are specifically designed to maximise the many benefits associated with their use.

The species are selected for their reliability and ability to deliver key agronomic advantages.

There’s a mix to suit almost every scenario. We can also tailor a solution to meet specific needs.